Cruising along the coast, it can be difficult to fathom the true scale of the Kimberley, with thousands of islands, inlets, bays, rivers and creeks. It is not until you enter the huge bay of Prince Frederick Harbour that you are given a real appreciation for the dimensions of the Kimberley coast.

Located at the base of York Sound and bordered by the Prince Regent and Mitchell River National Parks, Prince Frederick Harbour is one of the largest and most scenic inlets of the Kimberley coast. Both of the bays are fed by rivers flanked by boldly contrasting green mangroves and rainforest and soaring red sandstone cliffs. In contrast to the dryer parts of the Kimberley, this section of coast experiences the highest annual rainfall in the region, resulting in these lush stands of monsoon rainforest. Cliffs at the river mouth are some 200 metres high, and to the north, Mt. Anderson rises to an impressive 480 metres. The deep harbour was formed as a river valley, slowly becoming inundated by the rising sea as the great glaciers of the ice age retreated.

Prince Frederick Harbour is also home to Naturalists Island, the Uunguu name of which is Wunumpurramarra. On the northern side of the harbour, the main beach is some 300 metres long and strewn with a large number of marine snail shells, many of which are ‘transportable homes’ for hermit crabs! The island was named by the crew of a research vessel that dropped off a group of naturalists to conduct a scientific expedition of the area in 1984. 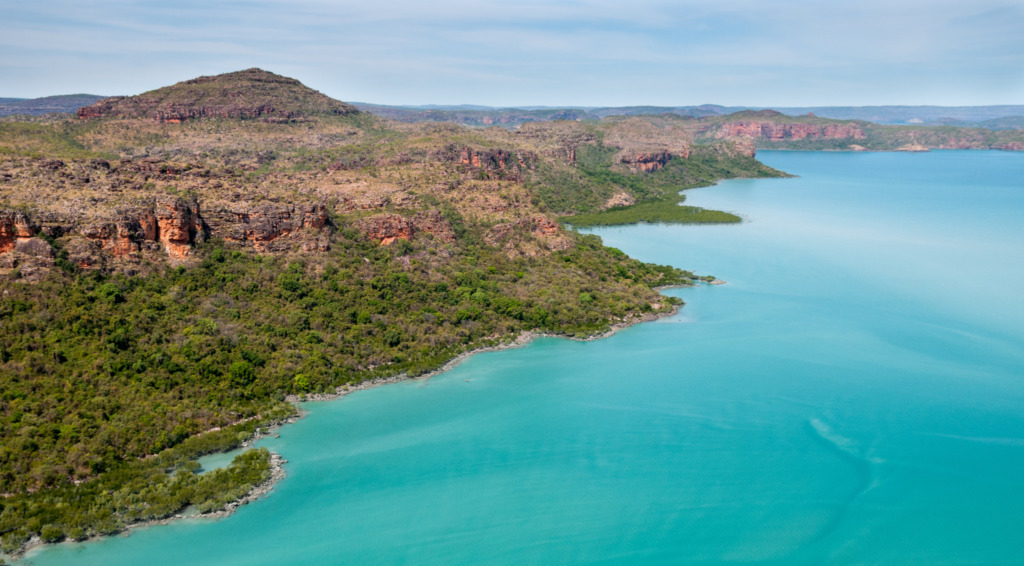 Prince Frederick Harbour is a pristine marine environment that supports a broad range of habitats that brim with life. Spend the day here and discover these habitats, and the animals that survive the tidal extremes to which the area is accustomed. The entire coastal ecosystem changes, from a drowned forest at high tide, to steep exposed mud banks when the tide is out.

Low tide reveals expansive mudflats and thousands of marine worms, crabs, sponges, oysters and snails that live within the intertidal zone. Whilst low tide on the mudflats seems an illogical place to look for fish, surprisingly, an unusual fish abounds in the soft mud and mangroves. The mudskipper is an amphibious fish that spends most of its time out of water, carrying water in its gills in order to breathe on land. If you’re fortunate enough to spot the blue-spotted mudskipper with its dorsal fin and tail spread open, look out – it’s preparing to fight for its territory! 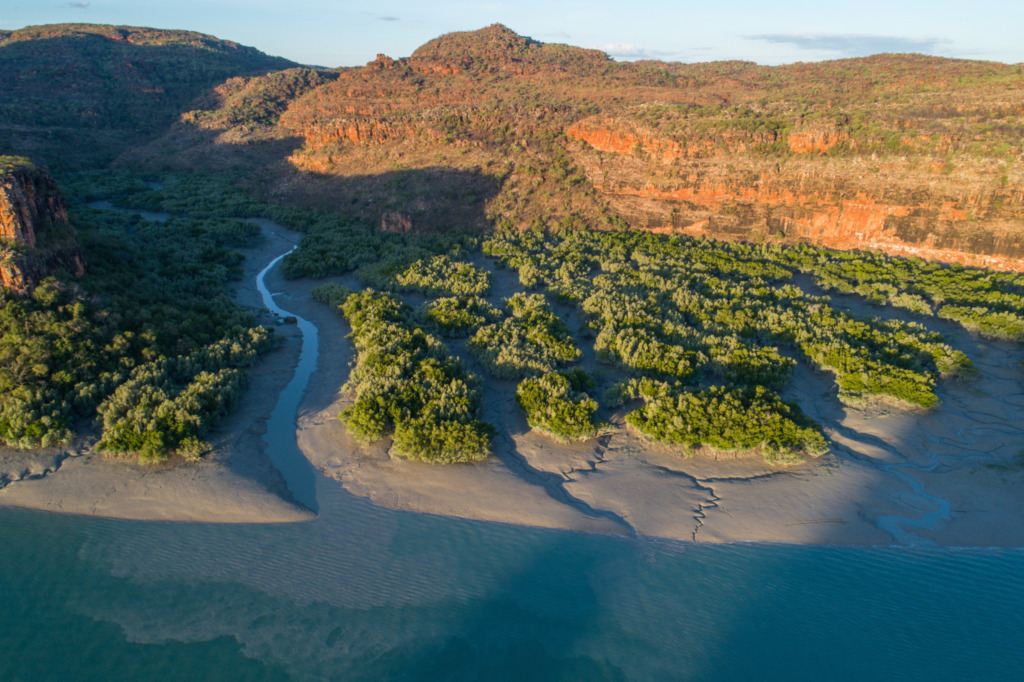 As the tide turns, it is enthralling to watch the water engulf the mud banks and see baitfish surging through tidal streams where predators await an easy feed. Mangrove and fiddler crabs scurry for their burrows, while jellyfish float into the rivers and creeks with the current.  As the mangroves become submerged, mullet, garfish and archer fish swim through the drowned foliage, while larger fish, including barramundi, hide in the tangle of mangrove roots.

Above the water, a myriad of birds are found in the mangrove forests fringing the Harbour. Flycatchers, kingfishers, whistlers, gerygones, bowerbirds and mangrove grey fantails are common sightings. Whilst soaring above, there is almost always a white-breasted sea eagle, osprey or kite.

Look closer at the mangroves to see if you can see three distinct zones. The mangrove apple is a pioneering species that forms groves on the mudbanks, often with an understory of club mangroves. Behind this pioneering fringe is a low forest of the ‘true’ mangrove, identified by its stilt like roots. The final zone of mangroves generally consists of the yellow mangrove. As you move upstream, from saline to freshwater influenced parts of the river, further changes in mangrove species occur.

The Hunter and the Roe

At high tide, these two serpentine-like rivers curve around the base of Mt Anderson. At the heart of the Kimberley, the Hunter and Roe rivers curl through an awe inspiring landscape of flat top mesas, ancient folded mountains, deep gorges, craggy sandstone cliffs and spires. For the intrepid, these wild rivers have it all – fishing, mud crabbing, birdwatching and the adventure of exploring where few travellers have been before.

The Hunter River, at thirty kilometres long, is a wild and picturesque river system lined with wide dense mangrove forests that abut sandstone ranges vegetated with lush rainforest. A large, unique rock formation marks the mouth of the river. Resembling the chiselled features of a Native American chief, it is known as Indian Head. Kampamantiya is the Uunguu name given to the mouth of the river. Meander further along the river to discover two dramatic 90 metre waterfalls (Hunter and Donkin Falls) and see the spectacular backdrop of Mount Trafalgar.

Within Hunter River, the appropriately named Porosus Creek provides an opportunity to get up close and fairly personal with estuarine crocodiles, Crocodylus porosus. Salties, as they are colloquially known in the Kimberley, are the region’s largest and most dominant predator. Thousands of pressure sensitive cells lining their jaws and arms alert them to prey, making them surprisingly efficient hunters, despite the murky, muddy tidal waters. Growing up to a gargantuan seven metres, these prehistoric reptiles are a thrill to see, resting on the muddy banks or tracking smoothly along the calm waters. 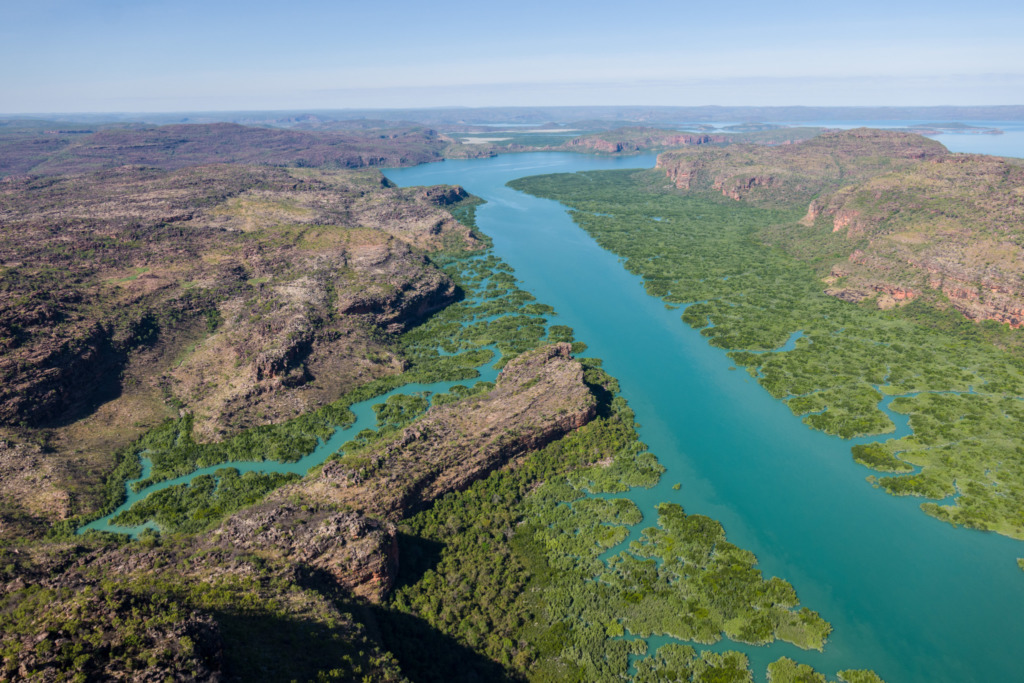 The Roe River, which originates in the Prince Regent Nature Reserve and flows in a north-westerly direction into the Prince Frederick Harbour, contains numerous permanent freshwater pools and has some of the best examples of Gwion Gwion rock paintings in the area.