Despite their huge size, whale sharks are docile, filter feeders that cruise the world's oceans looking for plankton.

These gentle giants are famous for their annual gathering at WA’s Ningaloo Reef, but outside these waters very little is known about this threatened species, which is considered as globally vulnerable.

Whale sharks (Rhincodon typus) are found throughout the world’s tropical and warm, temperate seas. They are known to inhabit both deep and shallow coastal waters and the lagoons of coral islets and reefs, and prefer surface seawater temperatures of 21 – 25 degrees Celsius.

Whale sharks occur throughout the Indian Ocean and have also been reported near the Maldives, Seychelles and Comoros Islands, and along the coastlines of Madagascar, Mozambique, Kenya, Pakistan, South Africa, Sri Lanka, India, Thailand, Indonesia and Malaysia.

This species is widely distributed in Australian waters, found mainly off northern Western Australia, the Northern Territory, and Queensland, with isolated reports of sightings from Victoria and New South Wales.

Not much is known about the migration of whale sharks except that they can travel thousands of kilometres a year, and over the years have become famous for their aggregation every spring at the continental shelf of the central west coast of Australia. Here they are most common in the Ningaloo Coast World Heritage Area, off Exmouth and Coral Bay, but they also appear at Christmas Island and in the Coral Sea. After July, most whale sharks leave Ningaloo and where they go largely remains a mystery.

A shark, not a whale

A whale shark is a fish and breathes via its gills. The name whale shark comes from the fact these animals are so large (as big as whales) and that they filter feed (like baleen whales such as the humpback). However, they have cartilage instead of bone – making them a true shark.

The whale shark is the largest living shark. It is the only member of the Rhinocodontidae family. Like many other sharks, whale sharks have biological characteristics such as large size, slow growth, late maturation and longevity that, despite an ability to carry large numbers of embryos, can impact upon their numbers. These characteristics, together with the species’ naturally low abundance, make whale shark populations highly susceptible to over-exploitation.

Whale sharks are the largest fish in the ocean, usually growing to 12 metres in length, although a fully-grown whale shark can reach up to an incredible 20 metres long and weigh 20 tonnes. These giant animals are easily recognised by a distinctive pattern of white spots and stripes on a dark bluish-grey background. Their under-surface tends to be pale, with no markings. The patterning helps them blend into their environment and is unique to each individual, which can be useful when researchers are counting populations.

Figure 2. Left: Photograph taken of the markings the left-hand side of a whale shark. Right: Computer analysis of the markings of the same shark to create a unique fingerprint.

The head of the whale shark is different in shape from most other sharks, being characteristically very broad and square. They have two small eyes situated towards the front of the head and an extremely wide mouth, up to a metre across.

The mouth of a whale shark contains over 3,000 tiny teeth arranged in more than 300 rows, however, they neither bite nor chew their food. Despite their huge size, these gentle giants are in fact filter feeders – one of only three known filter feeding shark species (the basking shark and the megamouth shark being the others). Whale sharks feed on minute, planktonic organisms including krill, jellyfish and crab larvae, which are strained from the water through the shark’s gills by a fine mesh of gill rakers.

Whale sharks filter large quantities of seawater either by actively sucking water into their mouths, or by cruising along near the surface of the water with their large mouths agape as they look for plankton. Whale sharks must consume large quantities of these small animals in order to survive. They also supplement their diet with larger prey such as squid or small fish including sardines, small tunas and anchovies.

Sensory cells in the nasal grooves above the mouth help the shark detect food in the water. It is thought that whale shark movement patterns are linked with spawning of coral and plankton blooms, which probably explains the annual appearance of whale sharks to Ningaloo Reef following the mass spawning of coral each year in these waters. 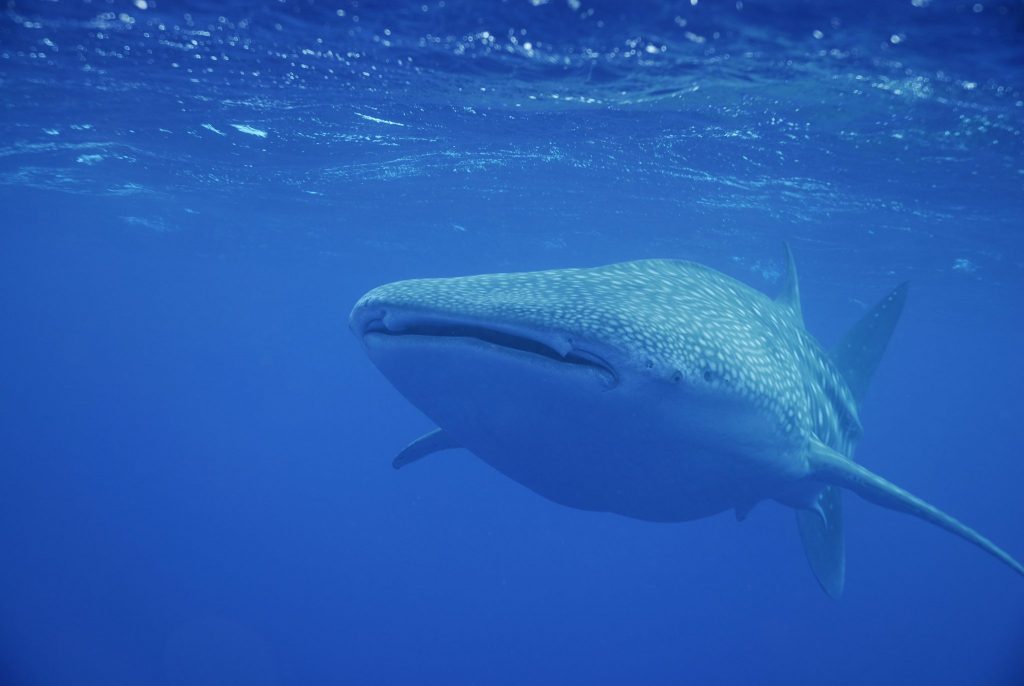 Little is still known about the whale shark’s life cycle or exactly how long they live. It is estimated that whale sharks may live to over 100 years of age, reaching maturity at around 30 years. They are thought to have a fast growth rate when very young, which then slows down, taking them a long time to reach maturity and adding to the vulnerability of this iconic species.

Like all shark species, male whale sharks can be distinguished by the presence of two claspers near the pelvic fin, which are absent in females. Whale sharks are extremely difficult to age, but evidence suggests that both sexes may reach sexually maturity when they are around eight or nine metres in length. The size of maturity of female whale sharks cannot be determined through external observation.

Female sharks give birth to fully-formed live young that develop from eggs in the mothers’ uteri prior to birth. About 300 young are born, between 40 and 70 cm in length, after an unknown gestation period.

The first documented capture of a pregnant female whale shark was off the coast of Taiwan, which was found to be carrying 300 ‘pups’.

There are very few known predators of the whale shark, although blue marlin and blue sharks sometimes prey upon small individuals. The most significant threat to this species appears to be humans.

Whale sharks’ large size, slow speed and habit of swimming at the surface (although they dive to depths of over 1,500 metres), makes them easy to kill. Although their skin can be up to 14 cm thick, they are still vulnerable to fishing and injury from boats. Even floating plastic rubbish they may swallow can cause injury or lead to death.

Unfortunately this species is hunted in some parts of the world for its flesh, liver oil, cartilage and fins, which have become increasingly popular for use in shark-fin soup. Due to their relatively large size, whale sharks’ fins are sold for very high prices and there is still a market for whale shark meat in several countries, including China and Oman.

Despite their size, whale sharks do not pose significant danger to humans. They are gentle, docile creatures that are at times playful and curious. Snorkellers swim with these giant fish without real risk, apart from the chance of an unintentional blow from the shark’s large tail fin.

Opportunities to swim with these fascinating creatures have led to the development of an increasingly popular, seasonal ecotourism industry, particularly in Western Australia where these sharks have become a huge tourist attraction at Ningaloo Reef and, to a lesser extent, at Christmas Island.

Every year from April to July following the annual mass spawning of coral, the world’s biggest fish congregates in the Ningaloo Marine Park. Visitors from all over the world now head to the Ningaloo Reef during whale shark season to experience the exhilaration of snorkelling with them.

The coral spawning at Ningaloo Reef provides whale sharks with an abundant supply of plankton and tropical krill, with unique current systems off WA helping to keep this food supply close to the coast, where the sharks are easily accessible to observers. The predictability of the occurrence of Whale sharks at Ningaloo has been important to the development of the ecotourism industry in the area. This industry is carefully managed through a system of regulations, including the licensing of a limited number of tour operators and codes of conduct that apply to people swimming with whale sharks and vessels operating in the vicinity of them.

Whale shark ecotourism is well managed in Western Australia via a collaborative approach between industry and the Department Biodiversity, Conservation and Attractions. Professional charter boat operators in places such as Coral Bay and Exmouth offer day tours and will inform you about the best way to observe these animals with minimal disturbance.

Whale sharks have been observed to react to SCUBA bubbles, touching and flash photography so these activities are not permitted when swimming with whale sharks in Western Australia. When these guidelines are adhered to, whale sharks do not seem to be affected by the presence of humans. With the rise in passenger numbers, it is becoming more important to observe these rules and regulations so that the increasing number of encounters does not have a negative impact on the sharks. The WA codes of conduct are ensuring the whale sharks are protected but can still be admired in a non-detrimental way– and are now being adopted in other parts of the world as an example of ‘best practice’ management.

The ecotourism industry’s interaction with whale sharks provides useful information that is passed on to scientists so they can better understand these gentle giants, and further educate people about them. 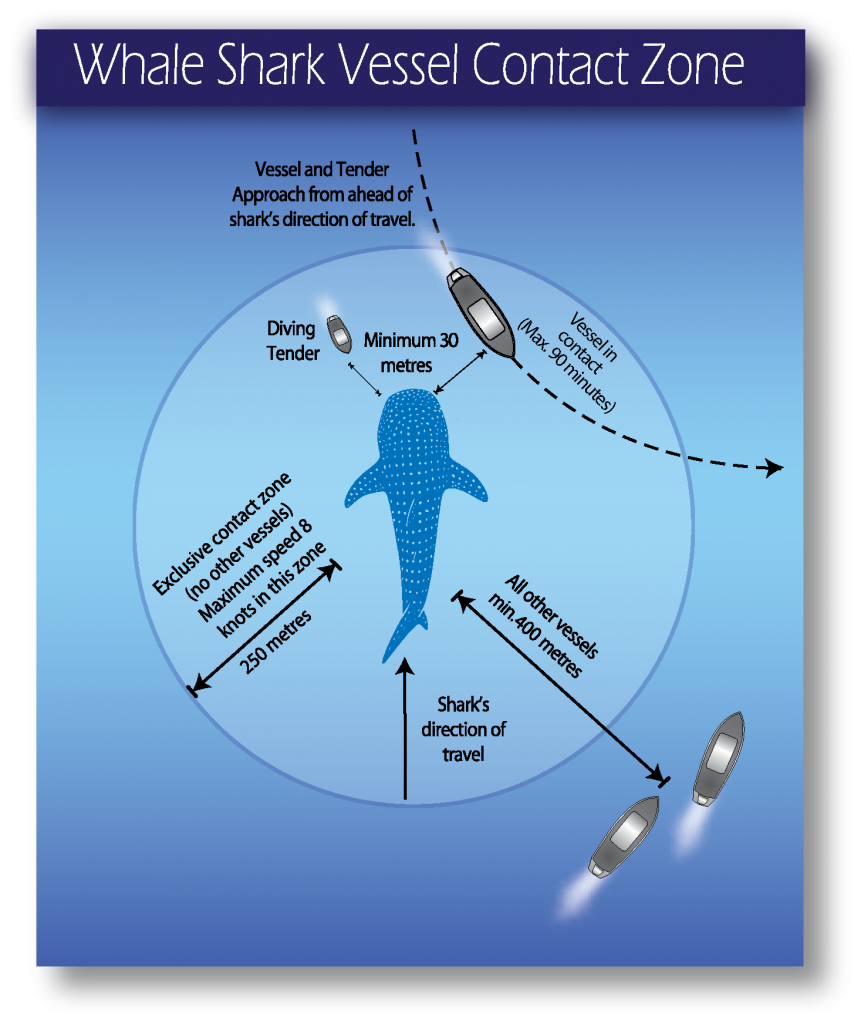 The whale shark is identified as a migratory species under the International Convention on Migratory Species. Whale sharks are protected throughout Australian Commonwealth waters under fully protected in Western Australia under the Wildlife Conservation Act 1950 and the Fish Resource Management Act 1994. Therefore, it is an offence to disturb, harm or fish for whale sharks in any way.

Although whale sharks are considered as endangered by the International Union for Conservation of Nature and Natural Resources (IUCN), there are still several locations where unregulated fishing and hunting for whale sharks occurs. This species is only protected in around 45 of over the 100 countries that it is known to visit, including Australia, United States of America, India and the Philippines. Work continues to achieve protection in other countries where whale sharks are still caught, either as a target or through bycatch.

Improved knowledge of the movement patterns of these sharks will help in the management and conservation of this species. Satellite tracking has been attempted for a number of years off Ningaloo, owing to concerns that fisheries north of Australia that exploit whale sharks may impact on the number of sharks that visit Western Australia each year. Tracking whale sharks that have been fitted with acoustic transmitters is another method that marine scientists have used to try and gather more information about whale shark movements and feeding patterns. More information is required to better protect these animals and, thanks to a thriving ecotourism industry in WA, more and more is being learnt about these majestic animals every year. 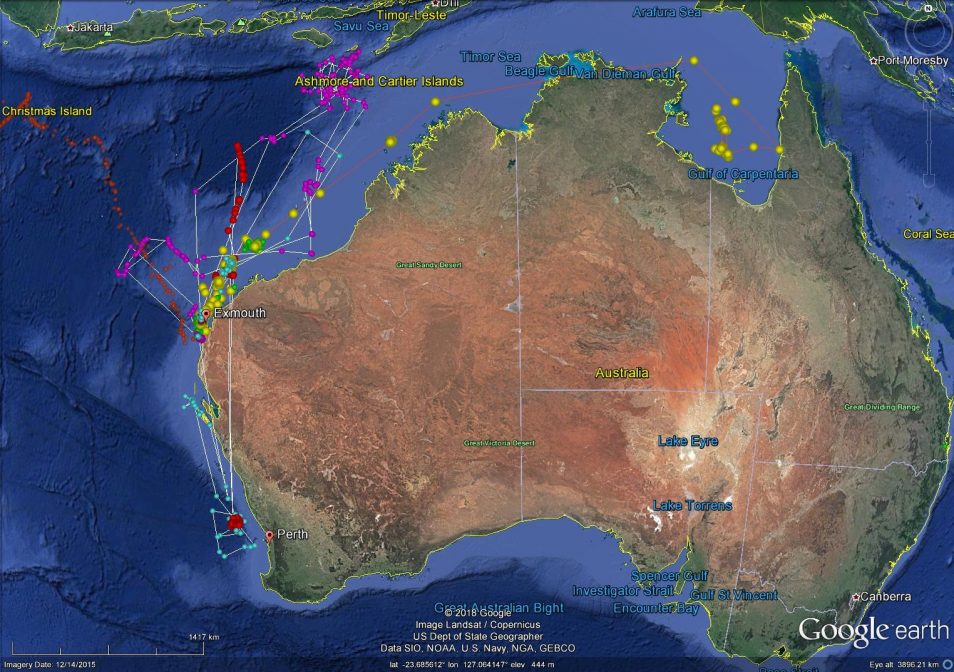 Figure 6. Tracks of whale sharks show they may travel over 3500 kilometres from their starting point. (Image: CSIROScope)

Department of the Environment and Energy, Whale shark.

Norman, B. 2005, The whale shark, Marine Education Society of Australasia.

Storrie, A. and Morrison, S. 1998. The Marine Life of Ningaloo Marine Park and Coral Bay. Department of Conservation and Land Management.

Juvenile (fish)
Young fish not yet capable of breeding

Maturity
Stage a which an animal can reproduce or breed

Temperate
In the southern hemisphere, seas that lie between the Antarctic and the Tropic of Capricorn