Aquaculture is the breeding, hatching, culturing or harvesting of aquatic organisms. It is similar to agriculture, but involves marine plants and animals instead of land based crops and livestock.

The primary purpose of aquaculture is to produce food for human consumption and other commercial products, but it can also be used to restore habitats and replenish populations of threatened and endangered species.

Aquaculture is the world’s fastest growing food production sector, driven by the dual forces of: 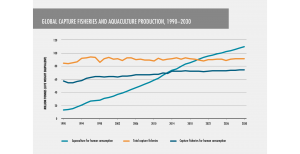 It is increasingly more likely that seafood eaten around the world today was commercially farmed, rather than caught in the wild. Currently, about 50% of global seafood production comes from aquaculture, and this figure is expected to grow to 62% by 2030.The global human population is set to reach almost 10 billion by 2050, which equates to a 52% increase in demand for protein. Given that fish and other aquatic organisms are a finite resource and that overfishing of our oceans is already occurring in parts of the world, aquaculture presents an opportunity to sustainably meet the needs of future generations. 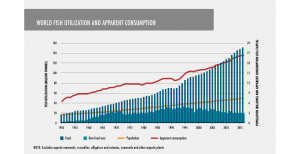 World fish utilization and apparent consumption,
Food and Agriculture Organization of the United Nations
Note: ‘Non-food uses’ include the production of fishmeal and fish oil, aquaculture and livestock feed, breeding stock, bait, pharmaceutical use and ornamental use.

Compared to other farmed animals, aquaculture is highly resource efficient. Seafood has the highest protein retention compared to other sources such as chicken, pork or beef. It also has a low feed conversion compared to other forms of protein and results in lower greenhouse gas emissions than other types of farming.
The two tables below show the most commonly farmed species around the world, by volume and value.

Top 10 farmed species by quantity in world aquaculture, 2017
Food and Agriculture Organisation of the United Nations

Top 10 farmed species by value in world aquaculture, 2017.
Food and Agriculture Organisation of the United Nations

Most aquaculture species are produced primarily for direct human consumption, such Whiteleg shrimp, Japanese kelp and Atlantic salmon. However, some aquaculture species have other uses in addition to this. For example, Eucheuma seaweeds are used for the production of carrageenan, an ingredient in cosmetics, manufacturing and food processing, while many freshwater species, such as trout, are also
bred as stock to support recreational fishing. Gracilaria algae is a common species cultivated for the aquarium trade, and some marine species are used for medical research and treatment.

The demand for seafood in Australia has been steadily increasing for the past 30 years, and current consumer demand exceeds domestic supply. Aquaculture has the potential to meet this demand. Since 2002–03 the gross value of aquaculture production in Australia has increased by 12% to over $1 billion. In 2017–18, it accounted for 45% of the total value of Australian fisheries production.

Aquaculture GVP (gross value of production) and volume by major species group, 1998–99 to 2017–18.
Source: Australian Bureau of Agricultural and Resource Economics and Sciences

Australian aquaculture production is largely based in regional Australia and makes a significant and positive contribution to regional development.
Australia’s aquaculture industry is small by global standards, however it has many advantages over its competitors, notably:

Although aquaculture is an important practice in ensuring global food security, there are a number of potential issues to overcome:

It must be stressed that these issues are primarily a concern in countries which lack appropriate regulatory control. Vigilance, ongoing research and technological development help to manage and minimise these threats. Farming practices need to be inherently sustainable because a healthy environment is essential to successful production, and the global growth of aquaculture reflects a trend towards continuous improvement.

Department of Agriculture, Water and the Environment, Aquaculture industry in Australia, http://www.agriculture.gov.au/fisheries/aquaculture/aquaculture-industry-in-australia