Despite Western Australia’s long coastline, our aquaculture industry is small by global standards – but it is growing and diversifying, with exciting opportunities on the horizon.

Aside from contributing to food security, aquaculture creates employment and business opportunities in areas such as feed and equipment manufacturing. It also has direct and indirect economic benefits to the state, particularly in regional areas.
In 2017-18, the total value of WA’s commercial fisheries and aquaculture production was $633 million. Of this, pearling (which is mostly commercially farmed) contributed $52 million (8%) and aquaculture $27 million (4%). 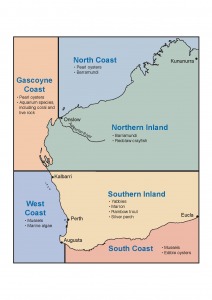 Production for the Western Australian aquaculture industry in 2016/17 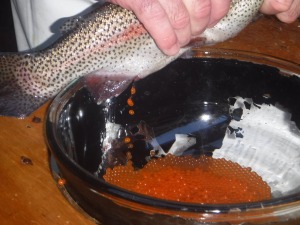 Eggs being stripped as part of trout aquaculture at the Pemberton Freshwater Research Centre.

Silver perch Bidyanus bidyanus
Sold as a live or processed product for human consumption and for aquariums and aquaponics purposes.
Silver Perch has been introduced to WA from the Murray-Darling river system and can only be cultured in impounded waters where the risk of translocation to local waterways is minimal.
Species is mostly grown as part of integrated farming systems in tanks and approved farm dams.
For more information about silver perch aquaculture, see: Inland_Aquaculture_FOP_111 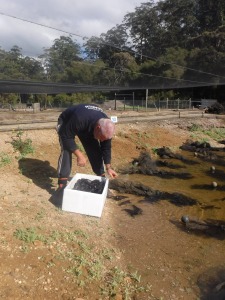 Wild caught breeding marron introduced into a pond as part of a program to improve genetic characteristics of stock. Mesh bags in the water provide shelter and protection for the animals.

Redclaw crayfish Cherax quadricarinatus
Tropical freshwater crayfish species grown in WA’s north, usually sold live.
Almost entirely based on semi-intensive aquaculture using purpose-built ponds, with water temperature over 23oC and shelter such as mesh materials and shade cloth.
Can be sold at about 12 months giving it comparative advantage over other freshwater crayfish like marron, which might take up to five years to get to market.
Can survive for reasonable periods out of water if kept cool and moist so relatively easy to be delivered to consumers live, giving them a strong market advantage. For more information about freshwater crayfish aquaculture, see: Inland_Aquaculture_FOP_111 http://www.agrifutures.com.au/farm-diversity/freshwater-crayfish-redclaw/

Mussels Mytilus galloprovincialis
Main edible mollusc cultured in WA.
Blue mussels are grown near Albany and Cockburn Sound on floating long line and dropline systems.
Up until recently, the industry relied on wild spat settlement and due to its variability was showing a downward trend. However, stock is now raised at the Shellfish Hatchery in Albany.  For more information about mussel aquaculture, see: FRDC_Report_Blue_Mussel_Hatchery 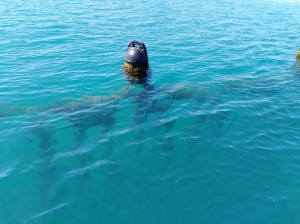 Floatation buoy holding up long lines at Cockburn Sound. Ropes on
which mussels grow are visible just below the surface.

Pearl oyster Pinctada maxima, Pinctada margitifera, Pinctada fucata
Grown for pearls, pearl shell and – on a small scale – for pearl meat.
Oysters are grown in hatcheries or collected from the wild. They are ‘seeded’ to stimulate pearl growth by surgically inserting a bead into the oyster’s gonad and then transferred to a farm where they are grown on line systems. For more information about pearl oyster aquaculture, see: http://www.fish.wa.gov.au/Fishing-and-Aquaculture/Pearling/Pages/default.aspx http://www.mesa.edu.au/aquaculture/aquaculture38.asp 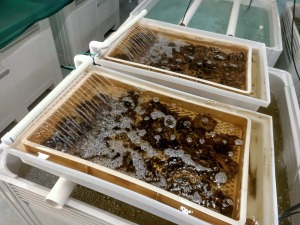 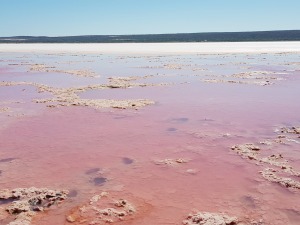 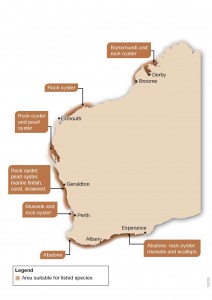 Prospective areas and species for further aquaculture growth in WA

The most significant future aquaculture growth in Western Australia is anticipated in the following areas:

As part of its commitment to developing a sustainable marine aquaculture industry, the State Government is setting up aquaculture development zones. Three zones are being established: in the Kimberley, in the State’s mid-west and in the Great Southern near Albany.
Aquaculture zones provide ‘investment ready’ platforms with strategic environmental approvals and management policies already in place. This allows commercial aquaculture operations to be set up without the need for lengthy, complex and expensive approval processes. The aim is to make it faster, less costly and more efficient to set up aquaculture businesses in Western Australia.

Barriers for aquaculture in Western Australia

To ensure future growth in aquaculture in the state, the following challenges need to be overcome by
current and/or future producers:

Both the State and Federal government have important functions in relation to aquaculture development
in WA. Some of these functions are: