The captivating potato cod is truly a giant of the fish kingdom. Its massive size and homebody nature draws divers who are looking for a story to tell about their underwater adventure. 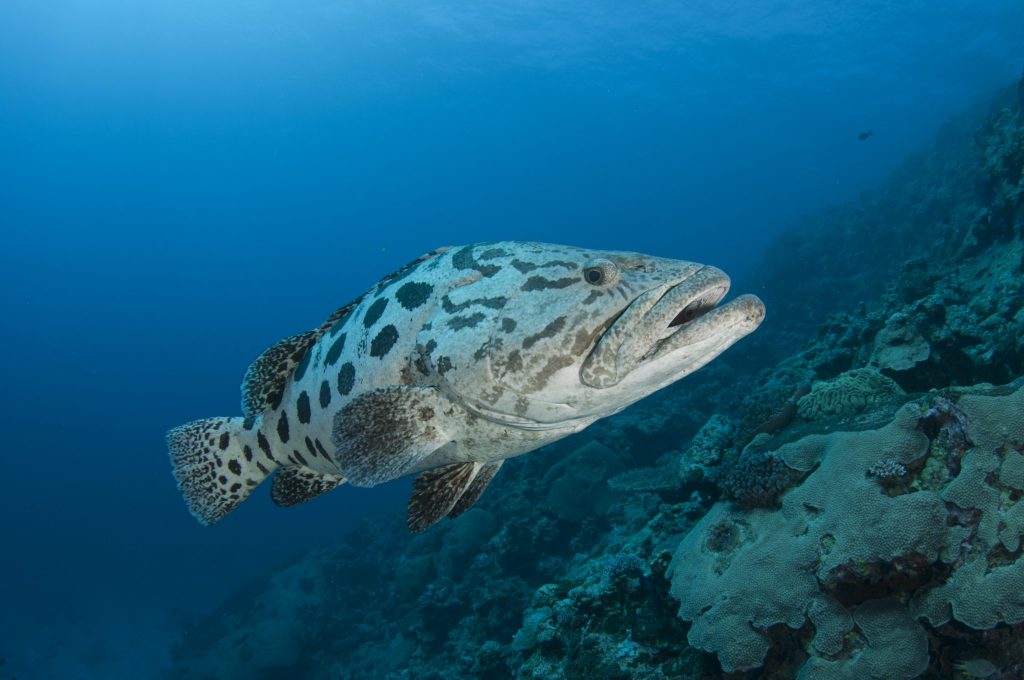 Widely distributed in Indo-Pacific tropical and subtropical waters from the Red Sea to the Solomon Islands.

In Western Australia from Exmouth to Wyndham.

The captivating potato cod is truly a giant of the fish kingdom. Its massive size and homebody nature draws divers who are looking for a story to tell about their underwater adventure. Potato cod have been known to get super friendly with divers who visit regularly, even growing accustomed to hand feeding.

It is these features that make the potato cod highly susceptible to overfishing. As a result, the species is irregular in its distribution and not often seen in areas open to fishing. Rather, it is in protected areas such as marine parks, reserves and sanctuary zones that the species thrives.

An ambush predator, the potato cod hides behind coral bombies waiting for prey to pass. When spotted, it lunges from its hiding spot, consuming in a single gulp, its prey.

The Rowley Shoals are a well known haunt for potato cod – be sure to check the channels and coral outcrops if  lucky enough to be in the water at this spectacular marine destination!

Coral reef habitats exposed to currents, such as channels or seamounts. Juveniles are found in shallow tidal pools whilst adults are found between depths of 10-150 m.

Pale brownish grey with dark brown black widely spaced blotches. The head has smaller brown spots with streaks radiating out from the eye. Some of the largest adults have been reported to be almost entirely black.

The largest adults can reach 2 m in length but most adults are around 1.5 m and weigh in at around 90 kg!

As a protected species in all Australian waters, the potato cod must be returned to the water immediately if caught.

As an inquisitive and slow moving fish, this cod is susceptible to overfishing and is easily speared or caught by line fishing.

The potato cod features in Asia-Pacific fish markets where it is a valued buy.

There are no records of injury caused by this cod, however being a large fish with powerful jaws, inexperienced divers should exercise caution.