The Pentecost, Durack, King, Ord and Forrest rivers converge into an estuary system to form a vast swirling mass of crocodile-infested muddy water - collectively referred to as the Cambridge Gulf.

The 1,000 square kilometre gulf has the unique situation of being a gulf within a gulf, located at the southern extremity of the Joseph Bonaparte Gulf in the Timor Sea.

The entrance of the Cambridge Gulf is defined by Cape Domett on the eastern shore, Lacrosse Island in the middle, and Cape Dussejour on the western shore. Much of the gulf and its rivers are bordered by expansive mangrove-fringed mudflats that are bleached and cracked by the sun in the dry season, and flooded in the wet. In other parts however, the gulf is bordered by pillars of rock that project spectacularly into the air, leaving sheer red cliffs and rocky hills towering several hundred metres high. Below the surface, the sea floor plummets to depths of 60 metres between narrow gorges, where uneven bathymetry sends the strong tidal current into a turbulence of whirlpools and boiling eddies. 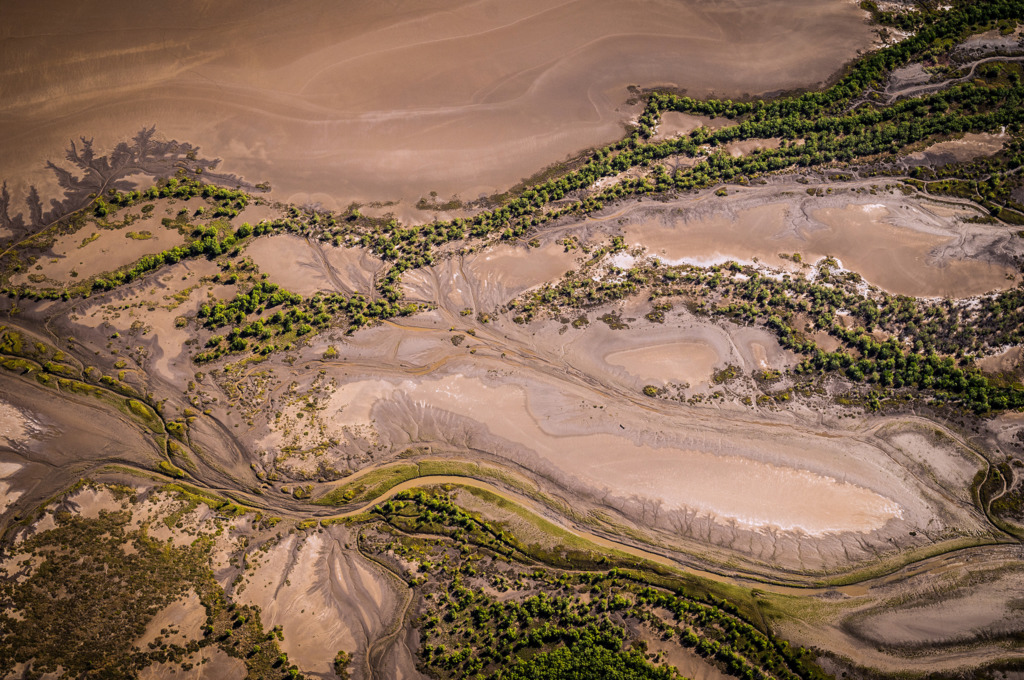 Adolphus Island splits the southern end of the gulf into the eastern arm, connecting to the mouth of the Ord River, and the western arm leading to the town of Wyndham. Considered one of Australia’s most northern and isolated towns, the historic port of Wyndham sits on the eastern bank of the gulf, some 100 kilometres inland of the open coastline and at the base of the formidable Bastion Range.

During its heyday a great number of vessels arrived in the gulf, at times up to sixteen boats anchored in the harbour, including steamships, big sailing vessels, schooners and steam launches. Established during the Halls Creek gold rush in 1885, the port now provides a vital link for the export of live cattle, and a shipping facility for both the Ord River Irrigation Area and numerous mining ventures in the East Kimberley. The port also caters for cruise vessel tourism and fishing charter boats that ply this remote and dramatic part of the Kimberley coast.

Upstream of Wyndham, the gulf constricts to just 150 metres wide in an area known to locals as ‘the gut’. Upon successful navigation through the five kilometre long channel, the gulf again opens out to its full width to meet the outgoing flow of the Pentecost and Durack Rivers.

If you are ending a cruise in Wyndham, the gulf’s murky brown water may be a stark change from days of endless turquoise waters experienced on the Kimberley coast. The murkiness is largely due to the large tides (spring tides up to nine metres) that generate strong currents with each tidal cycle. Highly turbid, well mixed waters result as the currents resuspend fine sediments and redistribute them throughout the gulf. At the upper end of the estuary the spring tide reduces to about two metres, however sufficient tidal currents are still generated to mix the estuarine and incoming river water. Here, salinities are generally less than seawater, particularly towards the end of the wet season when the marine waters of the gulf are diluted by the outgoing river water.

The first European explorer to enter the area was Phillip Parker King in September 1819. King sailed the 83 tonne cutter ‘Mermaid’ around Lacrosse Island and into the body of water he subsequently named Cambridge Gulf, after the then Duke of Cambridge. He had been given a brief to explore the far Western Australian coast and discover a river ‘likely to lead to an interior navigation into the great continent’. King sailed up a river (located just south of Wyndham, subsequently named King River) and, unable to find any signs of freshwater on the mudflats, departed. King’s description was so glum and pessimistic that no Europeans visited the area for sixty years!

The eastern arm of the gulf is fed by waters from the Ord River. The Ord has been significantly altered by land clearing that started 100 years ago and the dams constructed on the river in 1963 (Kununurra) and again in 1974 (Lake Argyle). These dramatic developments have had flow-on effects on the Cambridge Gulf. In contrast, the western arm, which is the estuary for the Durack and Pentecost rivers, is largely untouched by human activity.

Prior to the damming of the Ord River, the natural flow was highly seasonal, characterised by small, and at times negligible flow during the dry season and occasional river floods during the wet. The river flow has been regulated in the eastern arm due to the Ord River dams, which have the result of suppressing large river floods. Since their construction, the river has silted measurably, with the river mouth area decreasing by about fifty percent. As a result, the extent of saltwater push from the incoming tide has decreased by about fifty percent. In reality, the dams allow a greater volume of sediment to be deposited by the incoming tide, due to a lack of freshwater flow during the wet season. Studies suggest it may take 100 years for the Ord River to reach a new ecological balance. There are indications however, that the western arm is in equilibrium, since there has been no apparent net loss or gain of sediment over the past 100 years.

The Cambridge Gulf is not all mud and floods; it also offers exceptional fishing opportunities. Black jewfish, fingermark and of course, barramundi are some of the most prized catches for recreational anglers, with many locals using the gulf to access rivers beyond the mouth. The Cambridge Gulf is also an important area for the commercial fishing industry, with a number of mud crab, barramundi and prawn operators fishing the surrounding waters.