Abalone are a family of reef-dwelling marine snails which are the target in Western Australia of a lucrative export commercial fishery and one of the world's shortest recreational fishing seasons.

Despite this fishing pressure and examples of stock collapses worldwide, WA can boast one of the few remaining sustainable wild-stock abalone fisheries.

Abalone are a type of single-shelled (gastropod) herbivorous marine mollusc. Their body is large and fleshy, with a broad, muscular foot that is used to attach itself to reefs or rocks using suction.

The shells of abalone species are rough, flat and ear-shaped, which protects them from wave action and predation. In addition, their shells are smooth and shiny on the inside to protect the soft flesh of the abalone from damage. 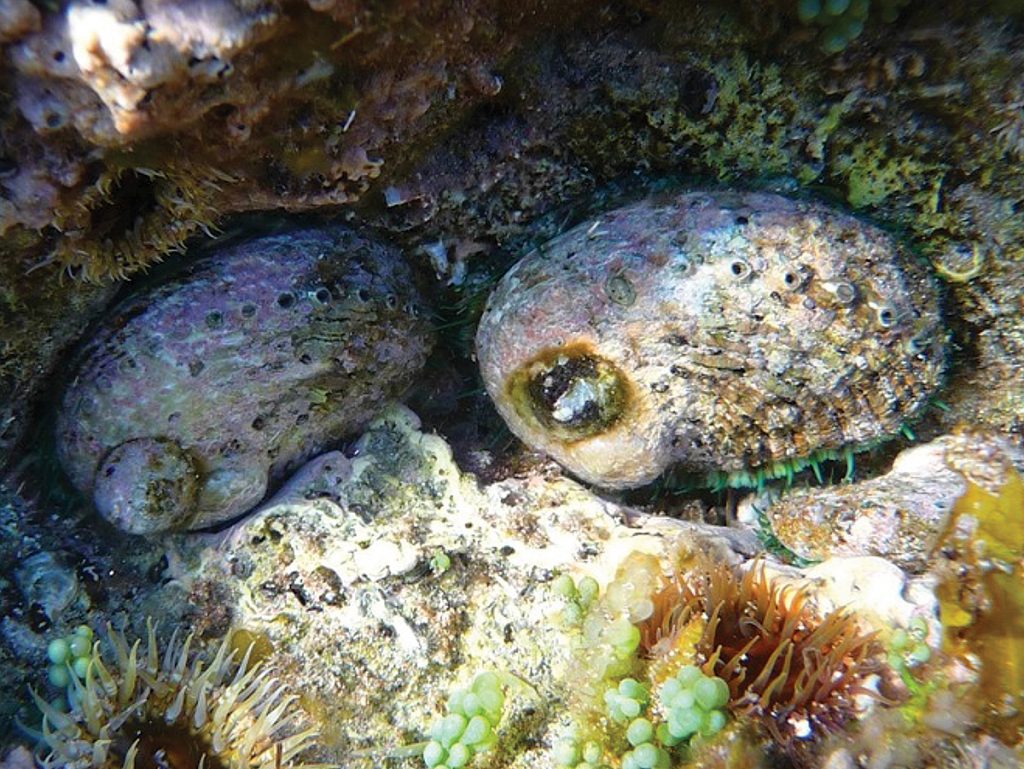 Figure 1. Abalone are a marine gastropod that use a muscular foot to attach themselves to reefs or rocks. (Image: Dave Murphy)

Abalone species are distinguished from other marine snails by a row of small holes or ‘pores’ that run along the edge of their shell. Abalone expel water that have passed through their gills through these holes. As abalone grow, these holes progressively close-up, with usually only the last four to six holes remaining open when they reach full-size. 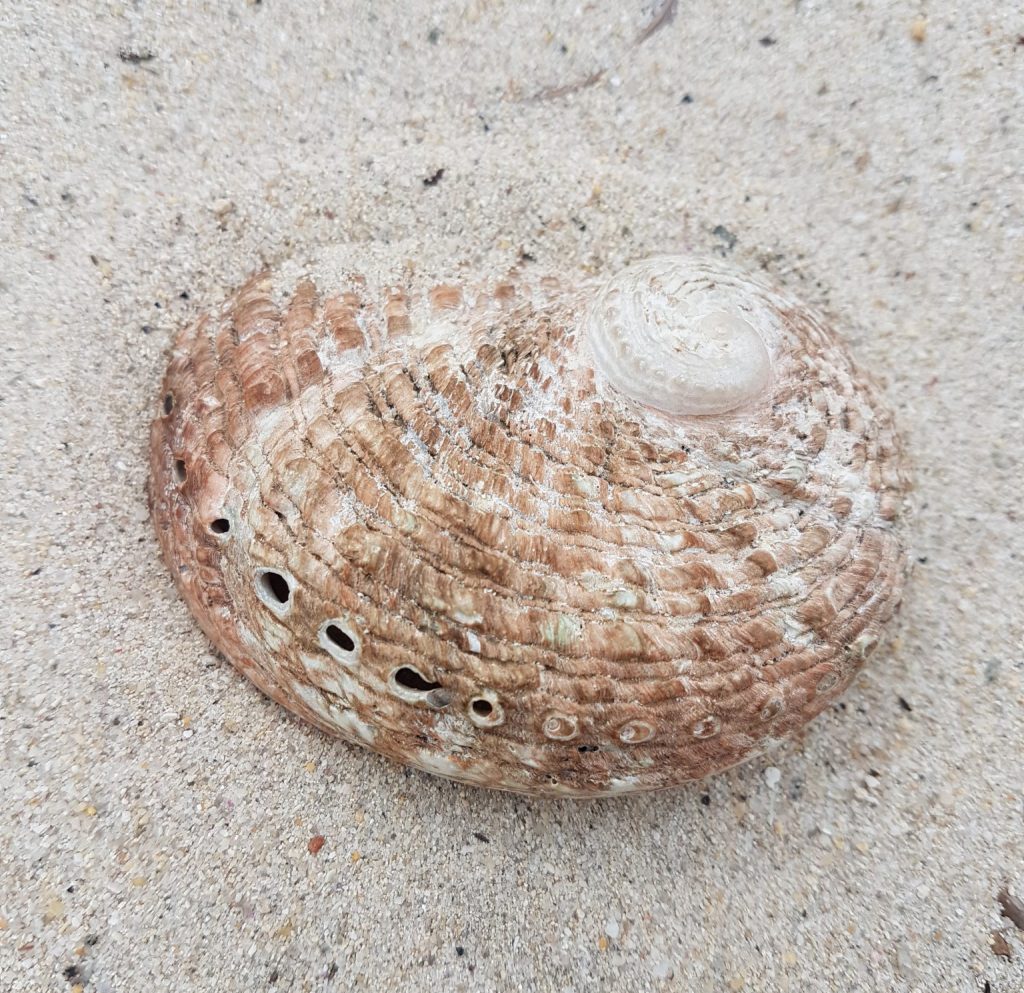 Roe’s abalone have a reddish-brown sculptured shell and are small, measuring up to 12.5 cm across their shell. In contrast, greenlip shells are smooth, off-white and can measure up to 22 cm, while brownlip shells are ridged, reddish-brown, and up to 24 cm. Greenlip and brownlip abalone get their names from the coloured edge or ‘lip’ of their muscular foot.

Abalone are widely distributed across tropical and temperate coastal areas. Roe’s abalone can be found as far north as Shark Bay in Western Australia and south around to Victoria. They mostly inhabit shallow limestone reefs along the west and south coast, especially around Perth. 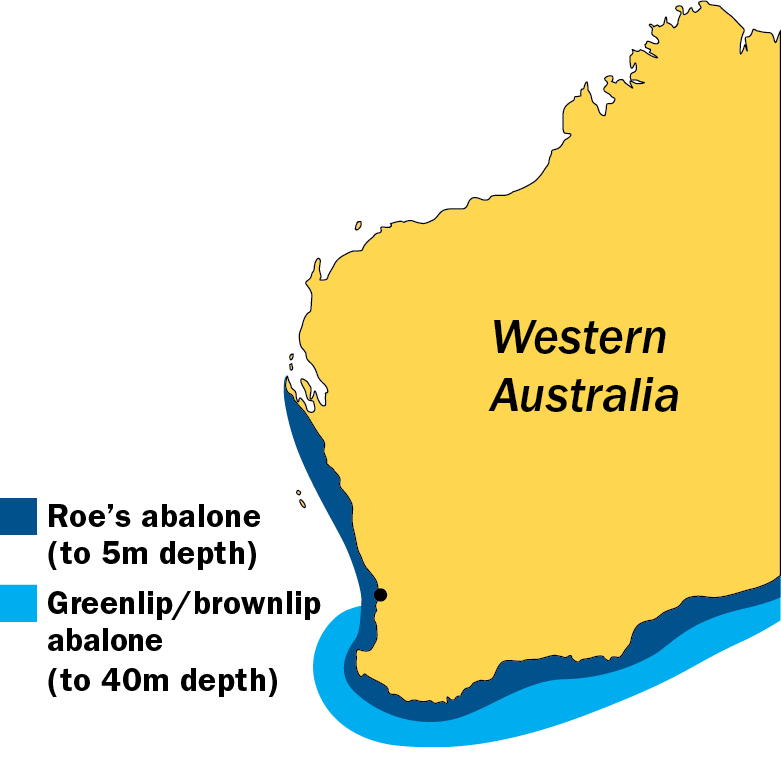 As with most marine invertebrates, mortality rates of abalone are highest in their larval and juvenile stage, but decrease as the abalone grow. Abalone are preyed upon by stingrays, fish (especially wrasses), sea stars, rock lobsters and octopus.

In response to threats from predators, abalone can clamp themselves hard to the reef using its shell as protection – or move surprisingly fast away from slower-moving predators such as sea stars.

Water temperatures off the south-western coast of WA rose to unprecedented levels during February and March 2011. This heat wave is viewed as a major temperature anomaly. Sudden changes in water temperature have been recorded of the Western Australian coast in the past, there have been no previous records of such strongly elevated temperatures.

The effect of the marine heatwave on abalone stocks appears to have been more severe than on some other invertebrate species. Abalone are less able to move to avoid unfavourable conditions. Between early February and early March 2011, mortalities on Roe’s abalone were estimated at 99.9% north of Kalbarri. A significant spike in sea surface temperature (SST) in late February appears to have been the trigger, occurring after at least 2 months of elevated water temperatures. Mortalities were also associated with discoloured water, poor visibility and algal blooms, none were shown to be attributable to disease.

The heatwave also affected the Perth metropolitan stock but to a lesser extent.

A complete closure of the commercial and recreational fisheries in the area north of Kalbarri and monitoring and stock recovery programmes in Kalbarri and Perth were implemented.

Whilst no major mortalities were recorded in the Perth fishery, evidence suggests a temporary stunting growth effect in mature age classes that has now ceased.

The Department of Primary Industries and Regional Development (formerly, the Department of Fisheries) are attempting to recover the collapsed abalone stock in the Kalbarri region through translocation from the nearest surviving population at Lucky Bay. Future monitoring will determine whether this has been successful in initiating recruitment. 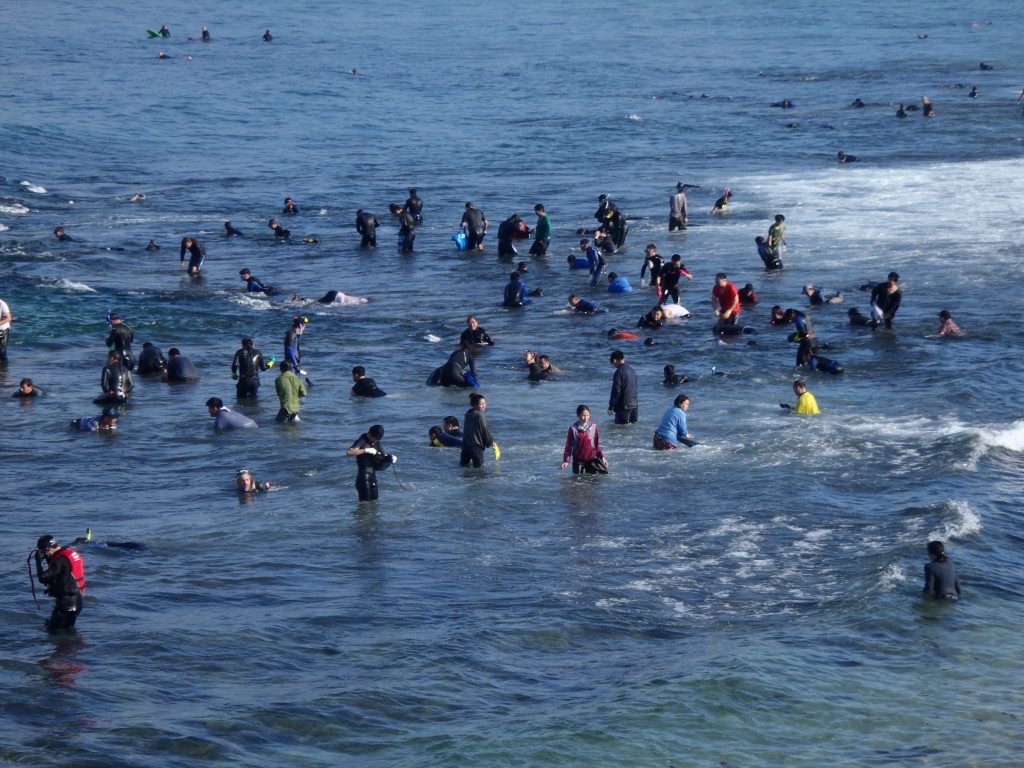 In Western Australia, a commercial fishery was established in the mid-1960s to supply Japanese and south-east Asian markets and coincided with the introduction of SCUBA (Self Contained Underwater Breathing Apparatus) diving.

Divers use ‘hookah’ breathing equipment from small boats (a surface air compressor and air hose) to harvest abalone. Divers prise mature abalone from the reef using a chisel-shaped abalone ‘iron’. Some divers choose to use motorised ‘shark cages’, which provide them with additional protection and enable the collection of abalone over a wider area. 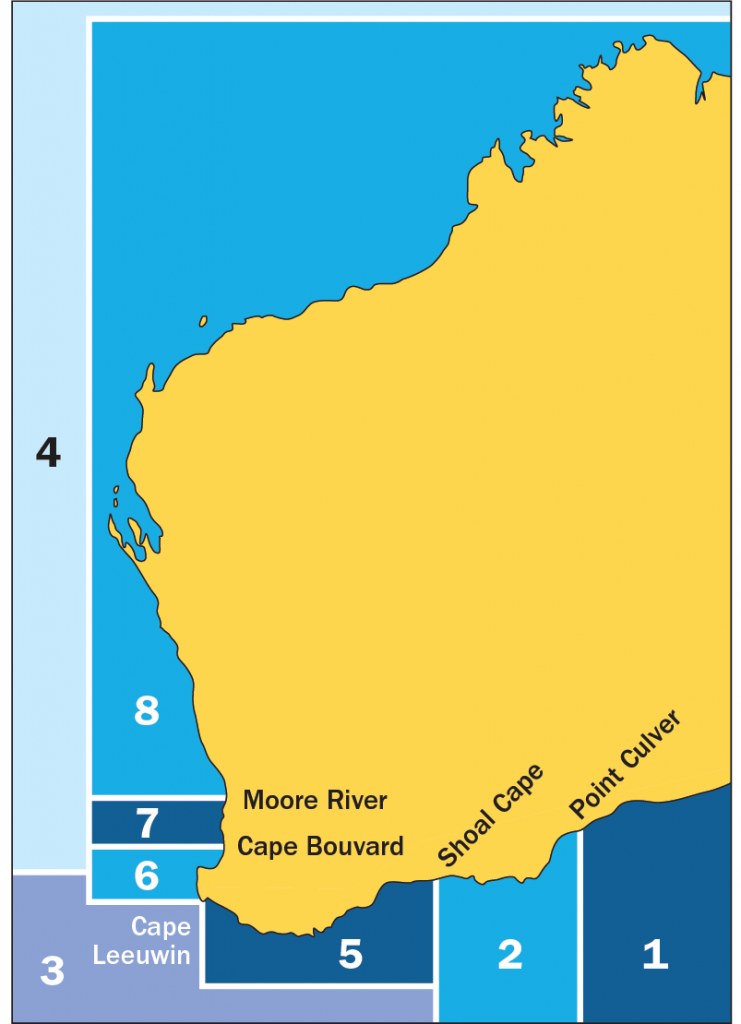 The popularity and price of abalone worldwide has soared, causing this seafood delicacy to be overfished in many countries. The only abalone stocks that have not collapsed to-date are in Australia and New Zealand.

Western Australia’s commercial abalone fishery benefits from a high demand and price for abalone in international markets, particularly in Asia. Careful management of the fishery ensures that abalone are harvested at a sustainable level and the breeding stock is maintained at acceptable levels.

The high value of abalone makes them attractive to poachers and illegal fishing remains a problem throughout southern Australia.

Abalone have a rasping tongue called a radula. As juveniles they graze on algae encrusted rocks but as adults they catch food by raising their shell and clamping down on algae as it floats by. As a result, they are therefore found in greatest numbers on those parts of a reef where bits of broken-off algae tend to collect.

Abalone are selective feeders, showing a preference for certain types of food, particularly red algae. Drifting algae is generally more plentiful during winter, when storms tear it loose, so the growth rate of abalone is usually greater at this time of the year.

Abalone aquaculture has developed world-wide in response to declining wild stock populations, high demand and high market prices and is an emerging industry in WA.

Abalone broodstock are obtained from the wild and spawned under controlled conditions in a hatchery. The planktonic larval stage lasts about 7 days, before the abalone are settled onto vertical hatchery plates. The plates are covered in encrusting green algae as a food source for the juvenile abalone.

Current research is focused on stock assessment using logbook catch and effort data that forms the basis of quota setting (Total Allowable Commercial Catch) in each area of the fishery. Current research initiatives include the collection of in-water diver survey data, commercially-fished abalone shell lengths, mark-recapture data and stock enhancement/restocking research programs During the short recreational abalone fishing season along Perth reefs, a field survey is conducted involving departmental research staff and Fisheries Volunteers to count the numbers of fishers on reefs and weigh their catch. 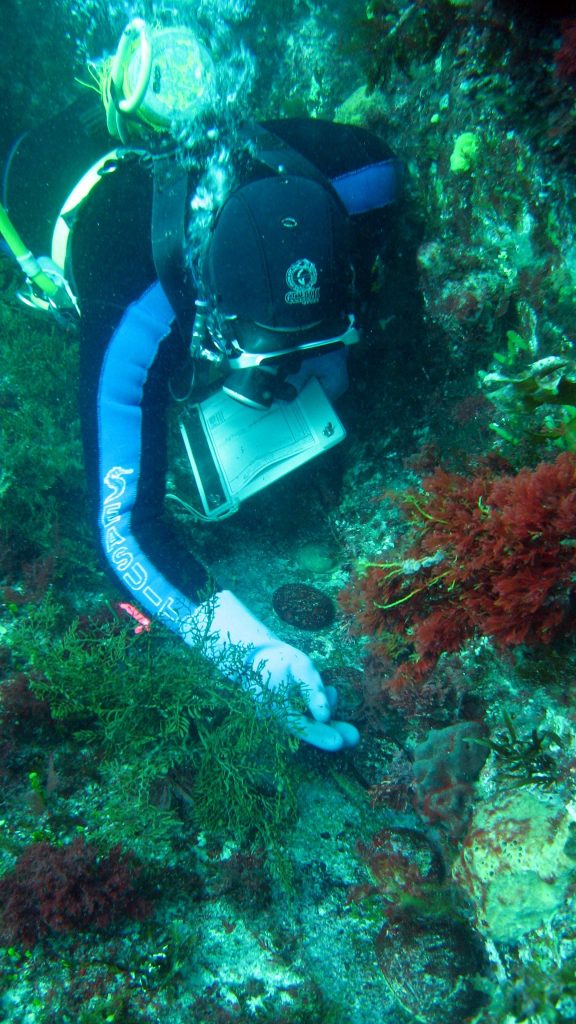 Caputi, N., Jackson, G. and Pearce, A. 2014. The marine heat wave off Western Australia during the summer of 2010/11 – 2 years on. Fisheries Research Report No. 250. Department of Primary Industries and Regional Development, Western Australia.

Spawn
Release or deposition of spermatozoa or ova, of which some will fertilise, or be fertilised, producing offspring