Mulloway is an aboriginal name meaning 'the greatest one' and growing to an impressive 30 kilograms, it's easy to see how they get their name.

Mulloway can be found throughout Western Australian waters, from Exmouth around to South Australia. Their preferred habitat is surf beaches, reef and rocky headlands, although they are occasionally spotted offshore at depths of 150 m. They also congregate in the mouth of rivers and estuaries during flood events.

Although not common, individuals of up to 70 kg have also been recorded, with the largest in Australia reaching 41 kg. However, the majority of mulloway seen off WA beaches are around 15 kg with larger fish appearing in the lower reaches of the Swan River and south coast.

Interestingly, mulloway is known to have a distinctive scent and some people claim they are able to smell schools of these fish from the beach. As well as being slightly on the nose, these fish can also be quite noisy. They belong to a group of fish known as the ‘croakers’. All the species in this group are equipped with elaborate swim bladders, which produce a croaking or drumming sound that can be heard from many metres below the sea surface.

Like many fish, mulloway are opportunistic predators and will feed on a variety of prey including fish, molluscs and crustaceans. Adults hunt alone or in pairs and generally speaking the size of the individual will determine the size of the prey it eats. However, large mulloway has been seen feasting on schools of Euphausides. These small shrimp- like crustaceans tend to gather in the water column just beyond the surf zone and make an easy meal.

The breeding and migration patterns of mulloway are still somewhat of a mystery. Adults are thought to breed during the summer-spring seasons in the surf zones of WA beaches. When the juveniles are around 15-16 cm long they move into the estuaries. They will stay there for first three to four years of their life before returning to the open ocean. It is believed that by six years of age the fish are around 90 cm long and will have reached sexual maturity. Mulloway have a reasonably long-life span of around 30 years.

Another common name for mulloway is ‘jew’ fish or ‘jewies’. It comes from the term ‘jewel fish’ and relates to the mulloway’s large otoliths (ear bones) that are commonly collected for jewellery items. 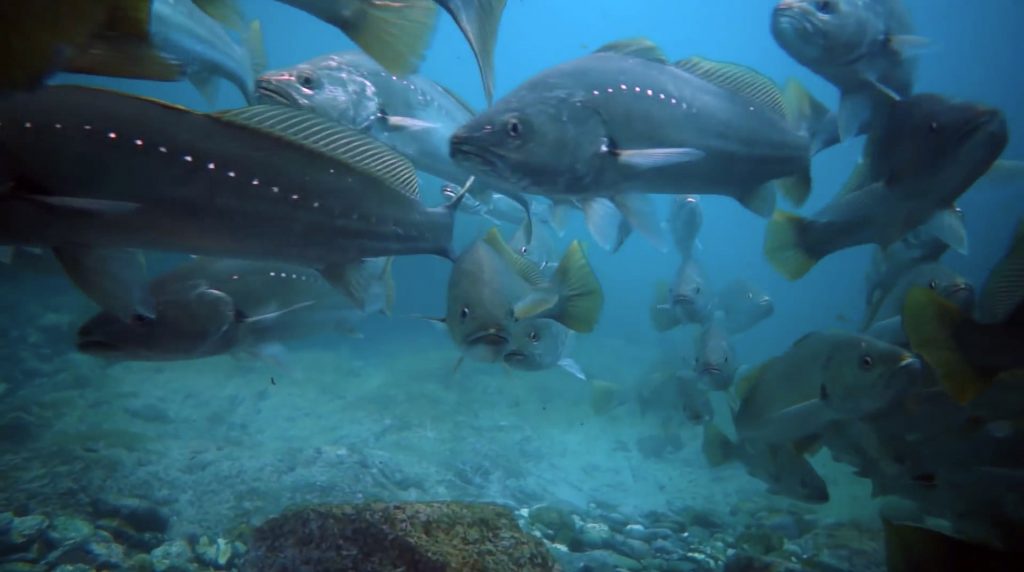