Manta rays are the largest species of rays in the world.

Manta rays, like other species of rays, belong to a diverse group of fishes known as Chondrichthyes. These animals are closely related to sharks, with the same type of skeletal system made of cartilage rather than bone. Manta rays are the largest species of ray in the world, and include the giant oceanic manta ray (Manta birostris) and the reef manta ray (Manta alfredi). Some individuals have measured up to an incredible 9 metres wide and can weigh in at more than 1400 kg – as much as a small car!  Both species of manta rays are listed as vulnerable by the International Union for Conservation of Nature. Human-induced threats include entanglement in fishing nets and pollution. 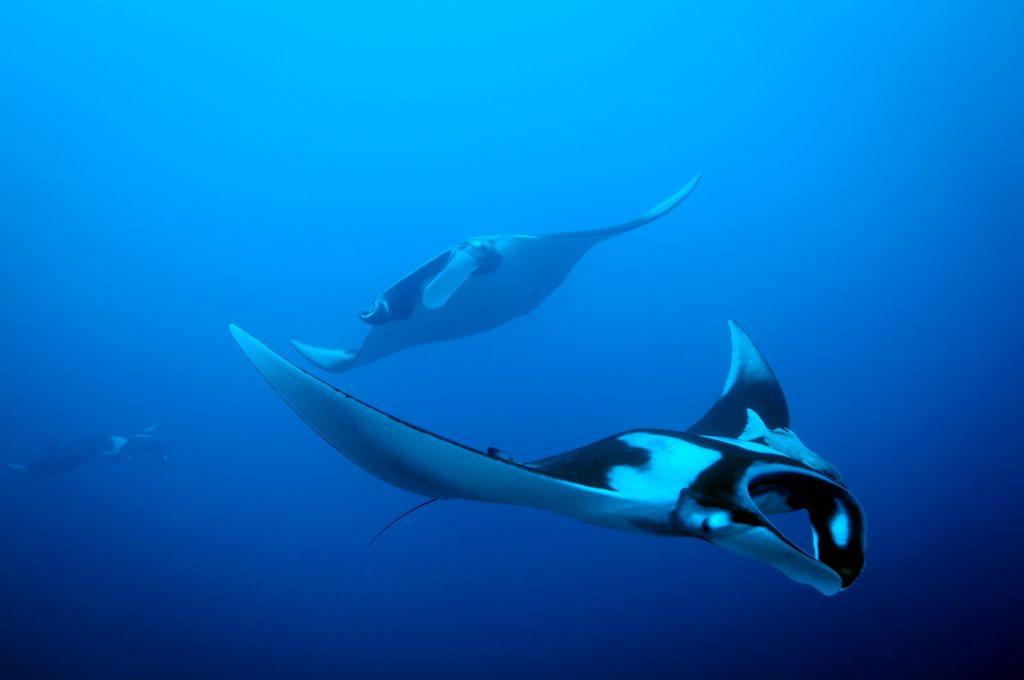 Manta rays are easily recognisable by their large pectoral ‘wings’. These animals feed on plankton and planktonic larvae, funnelling it into their mouths through fleshy parts at the front of their head called ‘cephalic lobes’. They also have more than 300 rows of tiny peg-like teeth, which are used by the male rays during mating. Mantas can vary in colour from black to blue-grey on the top of their body, but are almost pure white on their underside. Each animal has a distinct pattern on their body, giving individuals their own identity just like a fingerprint.

Figure 2. The large fleshy parts of the front of a manta ray are called the cephalic lobes. (Image: Rich Carey)

Manta rays live in tropical marine waters worldwide but are occasionally found in temperate seas. In Western Australia, they gather in large numbers at the Indian Ocean Territories and also the Ningaloo Reef.

While manta rays are known for their majestic slow swimming, they are capable of swimming at rapid speeds and even leaping out of the water and then crashing back down. This creates a loud slapping noise which can be heard several kilometres away. One theory is that the rays are trying to clean themselves of parasites; another is that it is actually a form of play. These animals are sometimes mistaken as dangerous due to their long, thin tail. However, their tail lacks a barb or stinger so it is completely harmless to humans.