Montgomery Reef is like no other reef system on earth. Formed some 1.8 billion years ago, this ancient reef is recognised today as one of the most significant geological marine environments in the Kimberley.

At low tide, Montgomery reef is an extraordinary panorama of vast lagoons, tiny sandstone islets and a central mangrove island – where large estuarine crocodiles lurk. Yet at high tide, you could easily miss seeing this ancient and fascinating reef system.

The magic of Montgomery Reef occurs on the outgoing tide, when a stunning phenomenon of whitewater rapids and cascading waterfalls is created and the huge reef appears to rise out of an endless ocean. It is a high energy environment – high velocity tidal flow off the reef can move up to two metres per second during spring tides! 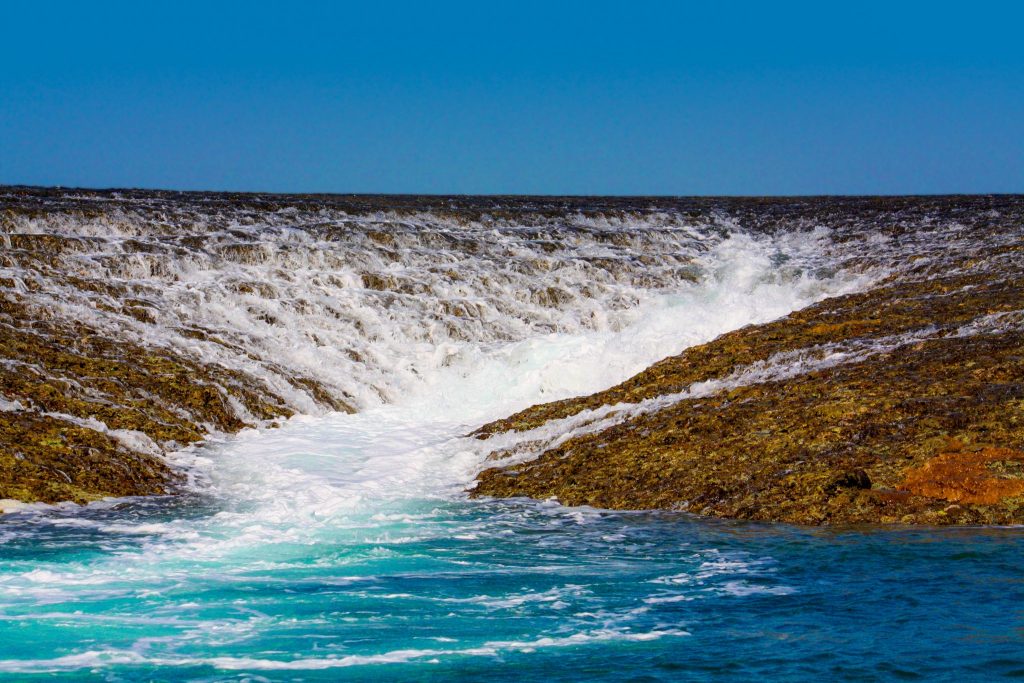 Lying at the boundary of Camden Sound and Collier Bay and around 400 square kilometres in size, it is Australia’s largest inshore reef. Brimming with marine life, Montgomery Reef is a spectacle to behold, with fish, sea snakes, turtles and blacktip reef sharks thrashing and tumbling down the reef’s flanks, only to be swept away as water cascades off the emerging coral platform.

Montgomery Reef is somewhat different to a regular coral reef. Whilst coral reefs are usually composed of limestone from coral skeletons, shell fragments and the remains of calcareous algae; Montgomery Reef, is an ancient terrestrial tableland created from the same rocks as the surrounding Kimberley Basin. Covering the existing features of the rock is a more recent layer of marine sediment, including calcareous coral, shell and algae.

Owing to its extreme habitat, coral colonies are small and sparse, yet, calcareous algae and low turf algae flourish. Where present, corals have a flattened appearance and mostly grow around the edges of shallow pools. Surprisingly, calcareous algae in the form of rhodoliths are the predominant reef building organisms on Montgomery Reef. Rhodoliths are unattached, photosynthetic organisms made of coralline algae, which aggregate to form complex communities and in the case of Montgomery Reef, act as a long barrier across the reef. They are mobile, moving back and forth with the tidal flow and winding their way around the reef platform. By doing this, they impound water behind and between them and create the lagoonal habitat of Montgomery Reef. 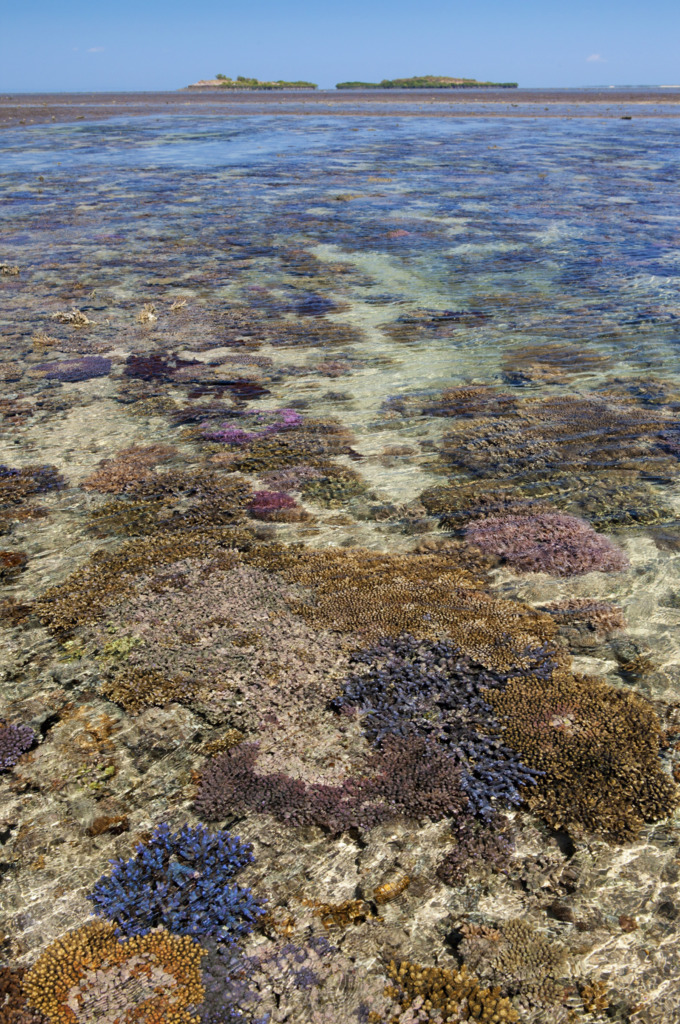 Covering large areas of the intertidal reef platform, pools and lagoons of the reef flat, rhodoliths clearly play a significant reef building role and contribute to the surrounding ecosystem. Their high primary production is the most likely reason for the abundance of large herbivorous animals such as green turtle and dugong.

The eastern rock platform of Montgomery Reef and of nearby High Cliffy Islands comprises a bed of ancient stromatolitic dolomite estimated to be between 500 and 1,800 million years old. Remarkably, the stromatolites at High Cliffy Islands have emerged as a new species for the Kimberley. A stromatolite is a solid structure created by single celled microbes called cyanobacteria (blue-green algae). The cyanobacteria form colonies and trap sediment with their sticky surface coatings. The trapped sediment reacts with calcium carbonate in the water to form limestone.

Montgomery Reef, or Yowjab, belongs to the Dambimangari people. According to Dambimangari tradition, the tidal movement of water in the reef system is associated with the tears of a Wanjina woman and the eyes of the creator snake.

“Her son went with the raft to hunt. At Montgomery Island, that is where they lived. Next day she cried, cried, and still he never came back. So she took her raft and went out into the sea looking for her son. She got angry with the saltwater and she said ‘you can have this’. The whirlpool was going around and she poked it in the eyes and it sucked her in and she died. The eyes are the Wunggurr, one eye is the whirlpool created by the neap tide and the other eye is the flood tide.” (Donny Woolagoodja)