Found in the tropical and warm temperate marine waters of the Indo-Pacific, many estuary cod are caught accidentally by anglers seeking mangrove jack and barramundi in creeks, or emperors over inshore reefs.

Found in the tropical and warm temperate marine waters of the Indo-Pacific including the Persian Gulf to South Africa, India, the Philippines, Singapore, Hong Kong, Taiwan, Fiji and around numerous other islands to Australia.  In Western Australia, from Shark Bay to the Northern Territory border.

Many estuary cod are caught accidentally by anglers seeking mangrove jack and barramundi in creeks, or emperors over inshore reefs.  Very few anglers target cod intentionally. Greedy by nature, it is not unusual to find hooks, lures and bait in the gullet of this cod.  Estuary cod can be solitary or form small groups, usually existing within a small home range of around 80 m.  The estuary cod is another tropical species that is a protogynous hermaphrodite – that is, it exists first as female and then as a male.  The major spawning period for this cod is from March to June with adults forming aggregations during this period. Whilst aggregating, the fish sleep partially buried in the mud or sand of sheltered bays. The species is considered an open water spawner with pelagic (floating) eggs. 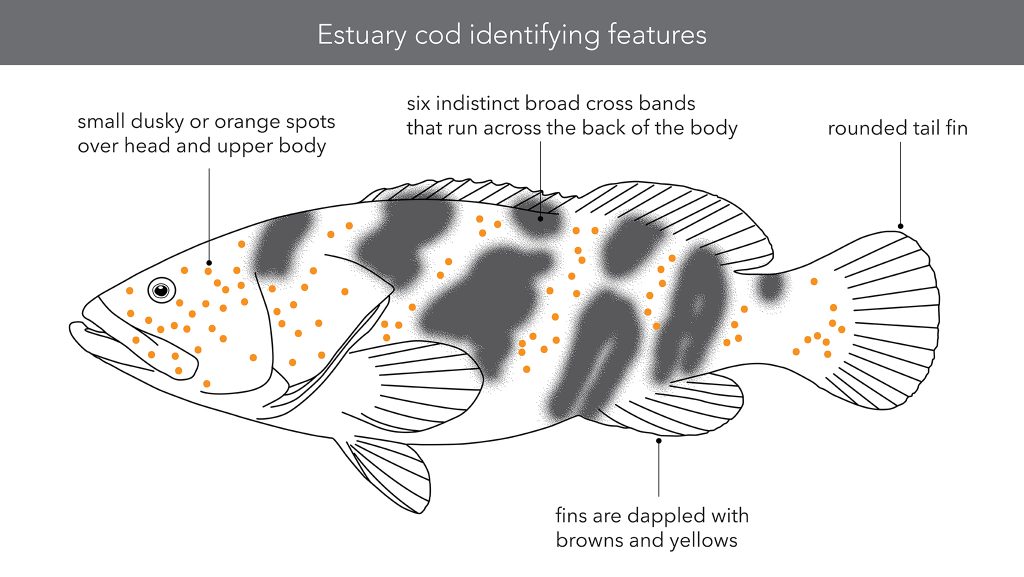 Juveniles live in mangroves and estuaries. Mature adults migrate out of mangroves and into near shore and outer reef systems. Can be found in depths to 120 m.

Feeds on a variety of animals including fish, shrimp, cuttlefish and crab.

Popular in Asian cuisine, the white flaky flesh is delicately flavoured although the larger the fish, the coarser the flesh.