With their goggling, oddly placed eyes and their whisker like pectoral filaments, blue threadfin are one of the weirder looking Western Australian fish species.

Blue threadfin are widely distributed in the Indo-West Pacific, from the Persian Gulf and China through to Indonesia, Papua New Guinea and northern Australia from Exmouth Gulf to the Northern Territory border.

With their goggling, oddly placed eyes and their whisker like pectoral filaments, blue threadfin are one of the weirder looking Western Australian fish species. Quirky looks aside, blue threadfin are a prized table fish across the northwest and are pursued by all sectors of the fishing community. An aggressive feeder and active fighter when hooked – blue threadfin are highly respected by recreational fishers, particularly as they can perform thrilling manoeuvres on the line.  Of course, blue threadfin isn’t a salmon at all; it’s a threadfin. The name salmon most likely developed when a couple of northern hemisphere migrants were lamenting about not being able to catch real salmon here in Australia – so they gave the name salmon to the first silver coloured, hard fighting fish they came across!  The threadfin filaments that give this fish its name, help it to find food by picking up vibrations of moving prey such as worms, prawns and crabs hiding in the mud and sand. Blue threadfin have been reported to use their pectoral filaments to herd small fish and prawns into bait balls to make their prey easier to capture. 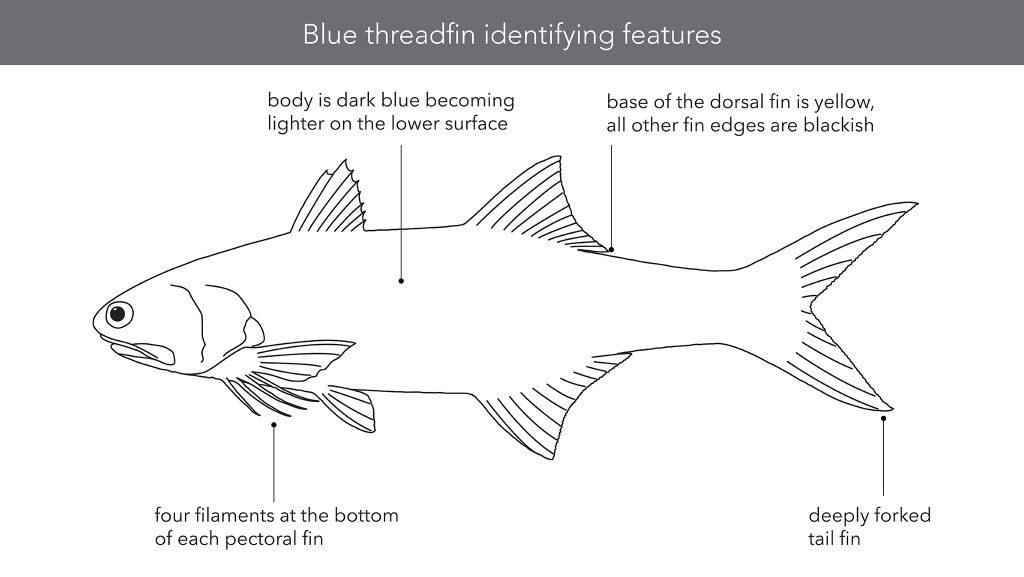 Mainly found in sandy or muddy bottoms in rivers, estuaries and streams, often near mangroves. They can also be found in the ocean close to shore, in bays and shallow water.

Body is dark blue becoming lighter on the lower surface.

Considered to be excellent eating. Caught commercially by the multi-species gillnet fishery, as well as by recreational, charter and aboriginal customary fishers.